Just two and a half hours after leaving Manchester, I found myself in a taxi travelling through a sun drenched, green utopia on my way to Modena. Italy is famous the world over for its food, but this region in particular is abundant with fabulous flavours. It’s home of balsamic vinegar, parmesan cheese,  parma ham and plenty of vineyards.

The city of Modena is beautiful, with buildings like the town hall dating back to the 17th century. A number of churches and piazzas dot the streets and the ambiance is serene and peaceful. There are many places to sit and sip a coffee by day or an aperol spritz during aperitivo in the evening (aperitivo is kind of like an Italian ‘happy hour’ where you pay a little extra for drinks and in return get to eat buffet food too. Usually really good buffet food!).

…with a lot to give

I LOVE great food, so I knew that Modena was going to be a rewarding trip and there was so much I wanted to see. I heard in advance about a ‘passport’ that allows admission to and travel between a number of local attractions for €48 for 48 hours. Its called ‘Discover Ferrari and Pavarotti land‘, coincidently some further local attractions which actually didn’t interest me as much. However, the Enzo Ferrari Museum in the centre of Modena is one of the places you can purchase the ‘passport’ so it seemed a good place to start and actually had some interesting exhibits on the history of Italian car production and lots of Ferraris!

Once you have purchased your passport from one of the locations you can jump on and off any of the coaches at any of the stops. The coaches make a circular route each hour. You get off at the location you’d like, do the tour which usually lasts 55mins and then get back on the bus, ready to repeat the whole thing again. You can stay in one location for more than one hour if you wish. I loved this method, as we got to have all the tours we wanted, on our own itinerary.

We visited in late August which (weather wise) was great. I was really surprised that the coaches only ever had a handful of people on them. For the places we visited, we were the only ones that got off, so ended up having private tours at every place we got off (bonus)! I hope the tour keeps going as it made the area so accessible, but right now I’m not sure how they’re making it viable, so go visit!

Our first stop was the Cleto Chiarli Winery. Firstly, it was beautiful – a 19th century manor house surrounded by vineyards, complete with working winery. Secondly, they make amazing sparkling wine! We were shown round by a family member (its been in the same family for five generations) and then left to wander the vineyards by ourselves for a while while the tasting was set up. 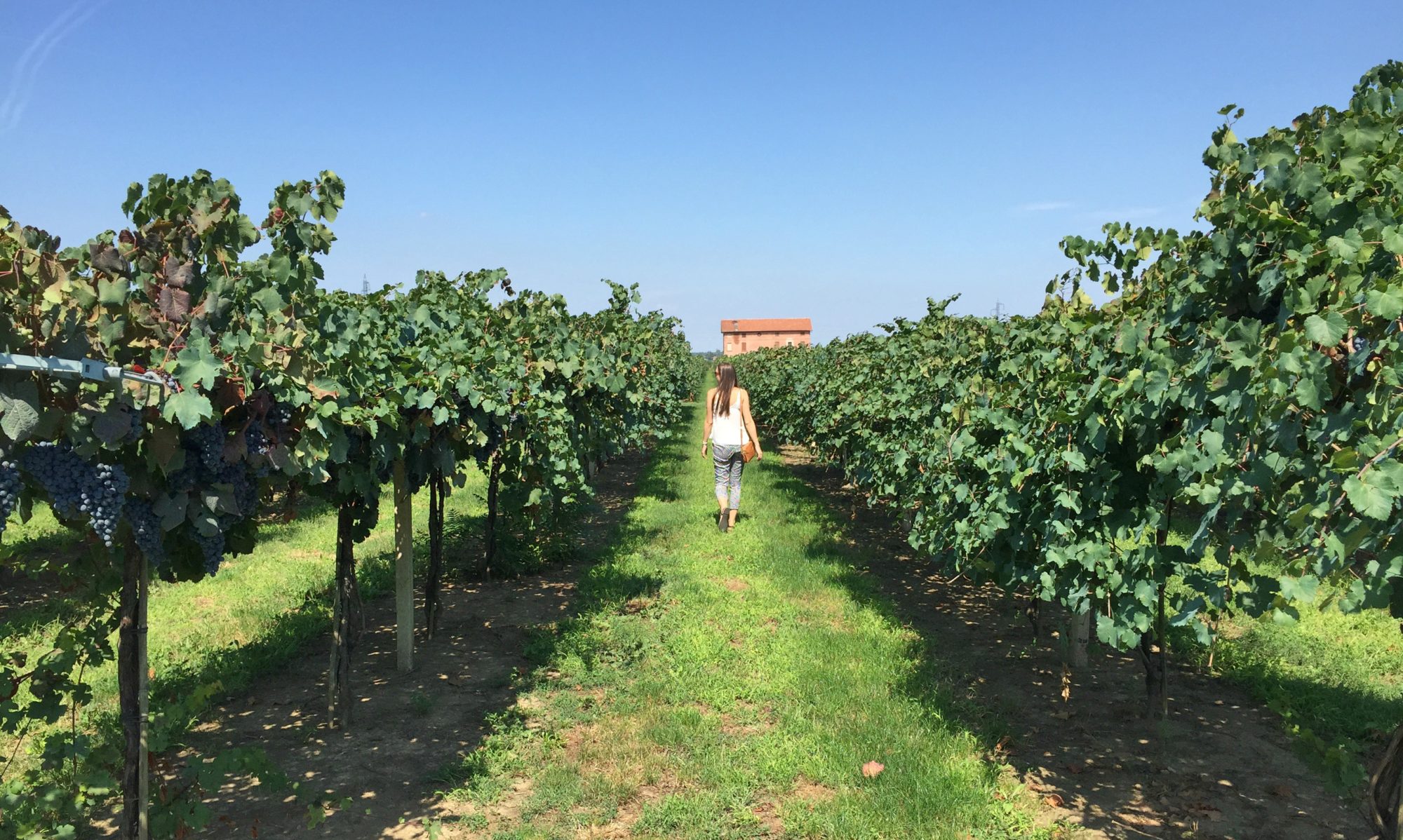 The vineyards of Cleto Chiarli Winery

The winery specialises in sparkling wine, including red sparkling, which I hadn’t tried before, but which tasted great. The tour and tasting lasted just under an hour, so we were able to catch the coach when it next came around and head to our second stop.

We made other stops including:

The ‘4 Madonne dell’Emilia’ dairy produces parmesan every day, 75,000 wheels a year, and have a HUGE warehouse to store it in. We got to see it all – from milk to the final product and all the rooms it visits in-between. During our visit a buyer was purchasing wheels of parmesan. We got to see how modern technology is replacing traditional roles. No longer is the quality of a parmesan wheel determined by tapping and listening by an expert ear. Instead, the parmesan wheels are passed through an X-ray machine and an image shows any internal imperfections which impacts the price!

Me in an aisle of relatively new parmesan wheels

I loved these tours – a mix of food and culture with plenty of sun thrown in. Who wouldn’t love that?!

There was even more fun had in Northern Italy including a meal at Osteria Francescana, the second best restaurant in the world (later upgraded to first!), trips to Milan and Venice… but I’ll save those for another post.

Love Italy as much as I do? Check out my experiences and tips for spending 48 hours in Rome and visiting Pompeii.

About me, the tall wanderer

A 6ft 2" accountant by day, who loves to travel and have new experiences. My blog posts wander on to all sorts of topics, so welcome to the tall wanderer!

thetallwanderer.com is where I share with you my adventures, home makeovers and product recommendations. Food features heavily too as I love hunting out local delicacies.
I also love hearing from you! You can leave me a comment on a blog, email or contact me via my socials: